When I first moved to New York City I lived on the Lower East Side. It was the early ‘80’s when the city was starting to change but was still down at the heels. My neighborhood was a land of rundown tenement buildings, the kind with broken front stoops, yellow-walled cracked-tile halls, tiny rooms with barred windows, the tub in the kitchen and sometimes, the bathroom down the hall.

I loved riding my bike around the neighborhoods and streets – Delancey, The Bowery, Mulberry –trying to get a sense of the history of the place but it wasn’t until Luc Sante wrote Low Life that I found out the fascinating story of the neighborhood and the city where I lived.

This wonderful book covers the hurly- burly years of New York’s greatest growth, from the 1840’s to 1919, the years when the city was becoming itself. It doesn’t tell the rarified and rather boring story of the Astors, Carnegies and Vanderbilts instead it reveals what it was like to live among the new immigrants, the politicians, the grifters and prostitutes, the orphans and madams, the cops and the swells who visited  Almacks, the Bowery saloons, and myriad opium dens and who lived cheek to jowl in stifling deadly tenements.

Sante writes so well you almost feel like this is a first person account not an incredibly well researched history.  He divides the book into four parts and covers each chronologically so that as you read each section you loop back and fold in information from previous chapters and realize how much each area of city life influenced and was influenced by the others:

Landscape covers topography as well as housing, streets, and transportation; Sporting Life covers music halls, saloons, brothels, and opium dens; The Arm covers cops, street gangs, and thugs; and The Invisible City covers orphans, reformers and radicals.  The few photos that are included give you a very clear idea of the gritty squalor each part covers.

This is the kind of book that sucks you in. You think you’ll just keep it on a table and dip in and out when you have time but it grabs you the way a con snagged a mark in the Tenderloin and it doesn’t let you go till you are finished.  I had to go through it to write this review and instead of quickly skimming I started to read it all over again. Now, sitting at my desk I am quite unhappy it is not 1880 outside my window and all I want to do is get back to the teeming streets of old New York. 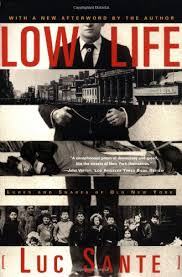 Luc Sante's Low Life is one of the best books written about .New York This is not the familiar saga of mansions, avenues, and robber barons, but the messy, turbulent, often murderous story of the city's slums; the teeming streets--scene of innumerable cons and crimes whose cramped and overcrowded housing is still a prominent feature of the cityscape. Low Life provides an arresting and entertaining view of what New York was actually like in its salad days. But it's more than simply a book about New York. It's one of the most provocative books about urban life ever written--an evocation of the mythology of the quintessential modern metropolis, which has much to say not only about New York's past but about the present and future of all cities.