You know that awkward moment when you’re at dinner with Diana Vreeland and she mistakes a word you say for its other meaning, resulting in a charming little misunderstanding? No? It must just be Bruce Chatwin, then, who recounts the details in one of my favorite short, short stories of all time, “At Dinner with Diana Vreeland.” Here’s the entire thing:

Her glass of neat vodka sat on the white damask tablecloth. Beyond the smear of lipstick, a twist of lemon floated among the ice-cubes. We were sitting side by side, on a banquette.

‘What are you writing about, Bruce?’

The lower lip shot forward. Her painted cheeks swiveled through an angle of ninety degrees.

‘No…no, Diana! Wales! Welsh Wales! The country to the west of England.’

‘Oh! Whales. I do know Wales. Little grey houses…covered in roses…in the rain…’

And such was a typical day in the life of the British travel writer, adventurer, nomad and novelist. I read Chatwin’s collection of travel stories, What Am I Doing Here? a year ago while I was living in Chicago. It was a brutal winter and I confined myself to my heated apartment taking recommendations for travel writers the way others do for in-network psychiatrists, desperate for even an imagined change of scenery. A co-worker recommended Chatwin and he was exactly what I needed—he whisked me away to sunny Yunan, to the barracks of Benin, along white roads on the island of Chiloe, and on the hunt for a Yeti in Nepal and a wolf-boy in India.

If you’re thinking that a Benin prison cell is a strange place to seek refuge from the (comparatively less life-threatening) Chicago winter, you’re not wrong. But Chatwin is a dazzling writer and a charming guide, and his fondness for unusual locales and improbable situations is downright infectious. He stays in a city for only a few pages before darting off to the next, often prompted by letters and phone calls from friends who are usually very fabulous people.

In “Werner Herzog in Ghana” he’s called up by filmmaker Werner Herzog, who is making a film based on one of Chatwin’s earlier novels and would like him to come on set to help with the script. Weakened by what he calls “an impossibly rare disease” contracted in West China (he had HIV but kept it hidden until his death in 1989), Chatwin agrees to go on the proviso that he will be given a wheelchair. When Herzog counter offers with “four hammockeers and a sunshade bearer,” the offer is too tempting to refuse. What follows is a wonderfully bizarre and quixotic account of his time on set with the ever eccentric Herzog, the unpredictable and contentious Klaus Kinski (German actor and Herzog’s frenemy), and 700 costumed Amazonian women who wind up staging a real, off-screen riot over unfavorable sleeping conditions (think Burden of Dreams with less steamship-hauling and more machete-weilding women). Eventually, the women are placated by Herzog’s “old-fashioned Germanic courtliness.”

There is some ugly talk of bringing in the army. Instead, Werner—a monument of sanity in a cast of nervous breakdowns—slips out through a side door and confronts the girls. At the sound of his habitual cry —’Girls! Girls!’—the rumpus simmers down. He and their spokeswoman, Salome, immediately reach a compromise. Laughing happily, the girls go back to their buses.

Werner comes back in, exhausted, and says to me, ‘That was only an arabesque.’

If some of Chatwin’s stories seem too good to be true, it’s possible they are. His books In Patagonia and Songlines were both controversial for mixing fact and fiction (the latter by his own admission). But that didn’t seem to bother Chatwin, who made a living crossing arbitrary boundaries, and it certainly didn’t keep him out of the canon of great travel writing. I love What am I Doing Here? because Chatwin’s restlessness is nearly palpable on the page. His stories zig-zag through time and bounce from place to place so much you get the sense that if you traced his path on a map it would end up looking like an enormous ball of yarn. I love Chatwin because he recounts boarding a train to Sultanpur the same way most people talk about their commute to work. I return to his stories not only because he transports me to other places through his prose, but because he makes the frenetic, nomadic, extraordinary life he led seem like an actual possibility.

What Am I Doing Here?
by Bruce Chatwin 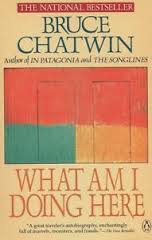 |+| Add to Your Shelf
What Am I Doing Here?
Bruce Chatwin