Clifton Fadiman asked two things of books: that they be lucid, with clear and direct prose, and that a recognizable “mind” can be found behind them. His daughter, Anne Fadiman, has written such a book. Ex Libris is a collection of essays about a life fashioned around books. To a seasoned reader, the form is quite familiar. Often, though, this genre can be heavily polemical, concerned with establishing proper taste. Or, when the writer is so well-regarded, we can’t help but resign ourselves to what he or she says, with hopes that perhaps by osmosis we too can tap into the ether of literary genius.

What makes this little book so charming is that it offers no such pretense. There aren’t proper or improper books to read, this or that literary tradition to follow; indeed, in a life enlivened by the written word, beauty and erudition can be found anywhere: a book by Bernard Shaw, a mail-order catalogue, a memoir of the Spanish Civil War, a survey of a northern expedition, a cookbook, or an encyclopedia. When we surrender ourselves to the word in all its variety, we come to appreciate the sublime nature of language and life. But don’t be fooled into thinking such open-mindedness is a form of laziness. Her relationship to words is akin to an infatuation, an obsessive-compulsive need to roll words around her fingers like one would do during a grape harvest. Take, for example, this passage from the essay, “The Catalogue Imperative”: Once, long ago, I bested a desperate bout of insomnia by studying the only piece of written material in my apartment that I had not already read at least twice: my roommate’s 1974 Toyota Corolla manual. Under the circumstances (addiction, withdrawal, craving, panic), the section on the manual gearshift was as beautiful to me as Dante’s vision of the Sempiternal Rose in canto XXXI of the Paradiso. While Fadiman’s critical faculties never tire, what makes this little collection so charming is the warmth and affection that weave effortlessly through each essay. It is, more than anything else, a love story between a reader and the written word. Reading, she writes, is a form of gluttony, a sentiment shared by many esteemed intellectuals: When we call people bookworms, we are likening them to the larvae of insects… Galileo compared ‘Orlando Furioso’ to a melon field, Coventry Patmore compared Shakespeare to roast beef, and Edward FitzGerald compared Thucydides to Parmesan cheese.

Each essay is a model of stylistic concision. A devotion to language told with perspicuity. There isn’t anything quite “common” about Fadiman’s reading life, and its use in the title reflects the humility and grace of her work. This is a cozy little gem that any book lover should always keep nearby. Chew its pages, read it out loud, scribble marginalia, and leave its pages dog-eared and stained by life—the way a reader should be, Fadiman says, exuberant and full of seizure. 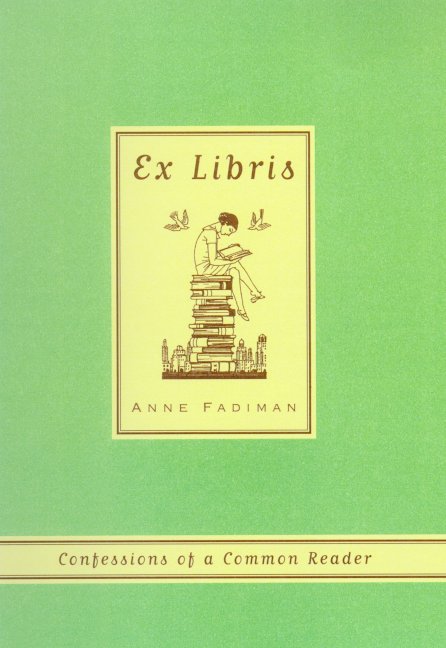 Anne Fadiman is the kind of reader serious bibliophiles aspire to become. In Ex Libris, a collection of essays that are love letters to the art of reading and the beauty of language, she expounds on the delights of proofreading, the allure of long words, and the satisfactions of reading out loud.