When I was a child, I read books over and over again—some so many times I memorized them. But once I grew up (whatever that means), I stopped rereading. I wanted the excitement of a new story, not the repetition of an old one. So I read forward, not back . . . until this month.

When I was asked to review a book I love for Off the Shelf, I thought immediately of AN UNEXPECTED GUEST by Anne Korkeakivi. I read it again to remind myself of what I’d loved, to fill my head with Korkeakivi’s beautiful sentences and compelling story, and to inspire myself all over again to celebrate this extraordinary book. When I read the final sentence yesterday—after a headlong, breathless rush through the last hundred pages—I gasped out loud. It was actually better the second time.

The story in AN UNEXPECTED GUEST takes place in less than 24 hours, as the protagonist—Clare Moorhouse, the American wife of an English diplomat stationed in Paris—prepares to host an official dinner party that holds the key to the future of her husband’s career, and where they will be posted next. In that span of less than a day, Korkeakivi deftly captures the arc of an entire life.

Beneath Clare’s quiet demeanor, hers is a life of long-held secrets. While she checks off the items on the mundane to-do list for the evening’s party, glancing at her watch periodically to mark the hours before dinner, everything begins to happen at once. Her teenage son, with secrets of his own, unexpectedly arrives home from boarding school. Clare unknowingly becomes a key witness to a post-9/11 act of terrorism. And Clare’s past—her passions, her political secrets, and the long-lost man around whom those secrets revolve—comes back with surprising force to make her question her choices, both those made decades before and those to come. This is a story of a woman whose quiet reserve has been her power, but it may also become her undoing.

In the postscript, Korkeakivi pays homage to Virginia Woolf’s MRS. DALLOWAY. In that celebrated book, a woman’s preparation for one dinner party also becomes a microcosm for a whole life. It’s an ambitious goal to emulate Virginia Woolf, but AN UNEXPECTED GUEST achieves that goal beautifully as Clare carves out a future for herself and her family, all while finding the perfect white asparagus and juggling a changing guest list.

An Unexpected Guest
by Anne Korkeakivi 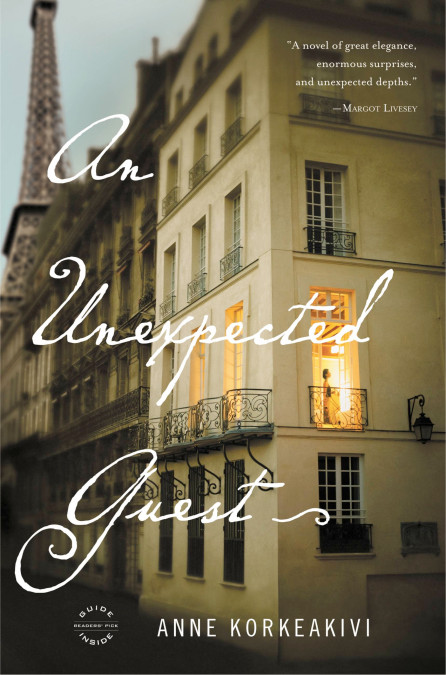 |+| Add to Your Shelf
An Unexpected Guest
Anne Korkeakivi

Your Invitation to an A-List Dinner Party