Who says you can’t go home? It’s been 10 years since tax attorney John Sutter left the mansions and society living of Long Island’s Gold Coast to sail around the world. He also left behind an aristocratic ex-wife, Susan, whose torrid affair with a powerful Mafia don ended their marriage in scandal—and murder. Turns out Susan can do more than plan luncheons and secretive trysts; she’s also a good shot with a handgun—especially when firing a fatal round into her ex-lover’s heart.

But if you want more details of those thrilling events, you’ll have to dive into Nelson DeMille’s THE GOLD COAST, the runaway bestseller that laid the groundwork for his much-anticipated follow-up, THE GATE HOUSE. THE GATE HOUSE picks up a decade after the events in THE GOLD COAST, and is packed with as much drama as its predecessor. DeMille—a name synonymous with suspense thrillers—is renowned for delivering slick plots, action-filled adventures, and memorable characters you’d want to sit down with to share a beer.

THE GATE HOUSE opens with John Sutter reluctantly returning to his former Long Island home. He’s managed to avoid its memories of scandal and heartbreak for a decade, but cannot ignore a family friend on her deathbed. John returns to the small gate house on his wealthy ex-wife’s former estate to say farewell and discovers his Susan (who, due to a technicality, never served time for the Mafia murder) living next door in their and son of the deceased mob boss, neighboring nearby. There’s just no escaping the past.

It gets worse: Anthony comes knocking, asking John to pick up where he left off 10 years ago and become the crime family’s consigliere. The situation becomes further complicated when Susan and John cross paths again, and find that despite all the emotional turmoil and violence in the past, they are still drawn to each other. As tensions rise and loyalties are tested, John quickly realizes he needs to decide whom he can trust—and how much that trust will cost him . . .

DeMille so brilliantly encapsulates prior events to set the stage for THE GATE HOUSE that, although a sequel, it reads like a stand-alone novel. Also noteworthy but unsurprising is DeMille’s signature characterization: John Sutter is wry, sarcastic, and utterly charming;his humorous asides to the reader—from imaginary letters to Emily Post to the evolving nicknames for his former in-laws—provide much-appreciated levity as the narrative hurtles toward a breathtaking face-off.

DeMille is a true master of the genre, and his legions of devoted readers are a testament to the trademark qualities they’ve come to expect throughout his illustrious career. As fans turn the last pages of DeMille’s latest blockbuster, THE CUBAN AFFAIR, they can rest assured that THE GATE HOUSE is a classic worth revisiting.

The Gate House
by Nelson DeMille 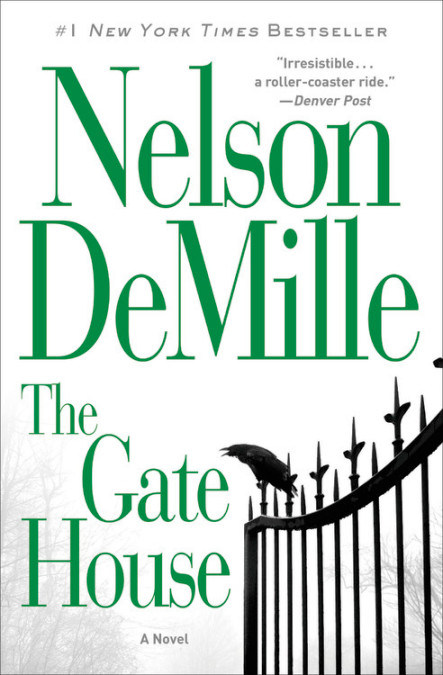 |+| Add to Your Shelf
The Gate House
Nelson DeMille

A Classic Crime Thriller From a True Master of the Genre