There are books that you skim along the surface, you enjoy them, you finish them, but they don’t take hold of you. Then there are the others where you plunge, no questions asked, into another world. When you emerge, called to dinner for the 10th time, jolted to your stop on the subway, you aren’t sure if you are in Narnia or on the N train. When the book ends, it’s like awakening from a dream where the world around you feels like it’s the make believe. It’s disorienting. I’m always eager to dive back in.

I discovered the powerful pull of words and books when I was very young. I don’t remember not being able to read Although, once  when I was 5 or 6, I had trouble deciphering the words in The Story of Babar the Little Elephant  because the type was in script. Since I couldn’t read it, I thought it was in French. A few weeks later, I broke the code and whenever I went to my grandmother’s house I would read about Babar, Celeste, and Zephir the monkey.

Books weren’t as readily available to me then as they are in today’s world. I had limited options: The bookshelves at home or the local library. In the first town I lived in the local library (The Perrot Memorial Library) was small, with a marble entryway. The greatest thing about that library was, once you had taken out your books, you could go sit under a willow tree by a stream and read them. It was heaven.

When I was 8, we moved to a new house in a new neighborhood and that summer stretched before me unrelieved because I didn’t yet know any of the kids who lived on our street. However, I knew where I could find some good company so I walked the mile or so to The Greenwich Library and found refuge in the children’s room on the third floor. I’d collect some books and carefully carry them back home where I would read them, outside on the back patio, the stones cool under my bare feet while the summer heat shimmered around me. I’d read until the shadows pushed me inside. That summer, my trips to the library netted me a mixed catch of stories – mostly about horses and dogs (Lad: A Dog, My Friend Flicka, Misty of Chincoteague). I longed for a loyal animal companion but I was also thrilled to be transported by Half-Magic and hoped I’d look up from the pages of my book to find a magic coin of my own.

I loved discovering books and taking them out of the library but there was nothing like having a book of your own – still isn’t. Every birthday and Christmas my list included “a book”. For years a new Narnia book appeared regularly under the tree, and even though the series had been completed before I was born, a shiny new hardcover made me feel as if C.S. Lewis had just written the book to catch me up on the adventures of Susan, Peter, Lucy, and Edmund. I felt the same way about Laura Ingalls – I was practically an Ingalls sister as I traveled with Laura from the Big Woods to the Shore of Silver Lake to Laura marrying Almanzo.

My friends in elementary school loved books as well and we spent many a rainy Saturday in the library. We once decided that we would read through the children’s section from A-Z. I think we abandoned the plan fairly early on – we were very guilty of judging books by their covers – but it did allow me to discover Lloyd Alexander’s The Chronicals of Prydain series and solidified my love for books brimming with magic.

The shelves in our house offered up an eclectic mix. My tastes were definitely influenced by what my mother read. (She read A.A. Milne to us from the time we were born along with poetry that was over our heads – “The Highwayman” and “Sea Fever” – because she maintained that all children like good rhythm. She also read every book she ever bought me before she wrapped it).

A bit of a pack rat, she’d kept  many of the books she’d read when she was young (judging from my bookshelves the reader doesn’t fall far from the shelf). I read her original copies of Black Beauty, James Thurber’s Carnival, and then, once when I was home sick with laryngitis, I began to read the Oz books. (I told a friend in college that there were many books in the Oz series, beyond Dorothy’s adventures, and at first she didn’t believe me!) I discovered Nancy Drew when I found copies of some of the books in bags in the basement where my mother had been collecting donations for the used book fair at my brother’s school. I snuck them from the bags and read them quickly before they needed to be sold. They gave me a taste for mysteries which I sated with some Agatha Christie’s that were lying around the house. I loved taking a trip into the English countryside for some rather tastefully done murder.

When the shelves in the living room didn’t yield anything that appealed, I made my way to my eldest brother’s room. He read a lot of science fiction, and beggers not being choosers, I did, too. A few titles I recall are I Have No Mouth and I Must Scream and Out of the Silent Planet. And then there was a small paperback called The Hobbit that carried me into another time and place far beyond my imagination.

It’s funny, as much as the books I’ve read and loved have transported me, I can still remember where I was in my world when I read them. Charlotte’s Web will always be associated with reading under the covers after lights’ out (and the first book that made me cry). I read much of Gone with the Wind while sitting in my driveway waiting for the paint to dry on a project I was working on. I took The Silence of the Lambs with me to the beach, and despite the bright sun (and the sunburn I got that day) I still feel as if it was a day full of clouds. While I have read many of Dick Francis’ titles in many different places, I will forever link them to reading on the porch swing of my childhood home. The third time I read the Lord of the Rings trilogy I was stuck on the tarmac for 3 hours of de-icing the wings on the plane when I was trying to make my way to a business meeting.

Ripples from my early reading flow into what I read today – a good mystery can keep me up well past my bed-time. I’ve been transported to far-flung Westeros, and found myself in other places and other times as the books I read open up and take me in. I feel incomplete if I’m not reading something and I bring a book to keep me company on trains, in waiting rooms, everywhere I go. And, while I will read the cereal box at the kitchen table if it’s the only thing to hand, I much prefer the company of detectives, magicians, and sometimes real-life adventurers that pull me willingly into the flow of words.

The Thurber Carnival
by James Thurber 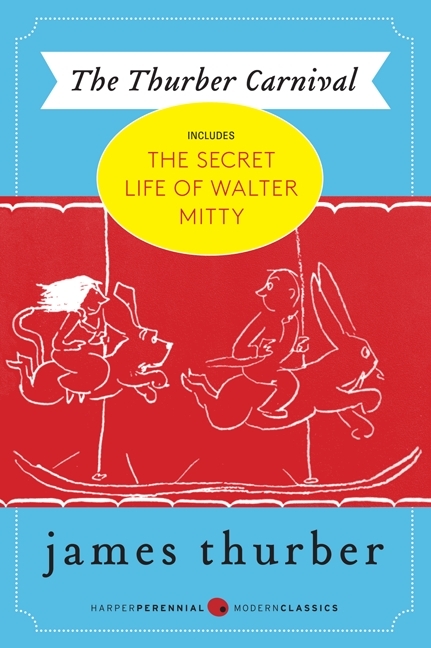 |+| Add to Your Shelf
The Thurber Carnival
James Thurber

James Thurber was one of the finest humorists of the twentieth century (and a crack cartoonist to boot). A bestseller upon its initial publication in 1999, The Thurber Carnival captures the depth of his talent and the breadth of his wit. The stories compiled here, almost all of which first appeared in The New Yorker, are from his uproarious and candid collection My World and Welcome to It—including the American classic "The Secret Life of Walter Mitty"—as well as from The Owl in the Attic, The Seal in the Bathroom, and Men, Women and Dogs.

A Lifetime of Losing (and Finding) Myself in Literature